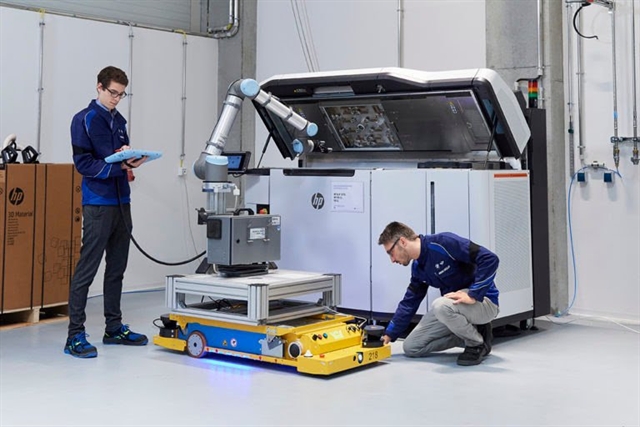 The BMW Group’s new Additive Manufacturing Campus in Munich, Germany, is finally open. In 2019, the company produced approximately 300,000 parts through additive manufacturing. Besides being a facility for prototype and series parts production, the new center will be the home to the BMW Group’s 3D printing technology research and associate training grounds for global toolless production. Present at the opening ceremony were Milan Nedeljković, BMW AG board member for Production; Daniel Schäfer, senior vice president for Production Integration and Pilot Plant; and Jens Ertel, who was assigned director of the Additive Manufacturing Campus.

The campus currently has 80 associates working the 50 industrial systems in the facility. A campus pre-development unit will be in charge of optimizing new technologies and materials for use around production sites. The BMW Group has made significant investments and partnerships with other manufacturers and universities over the past couple of years. Most notably were its 2016 investment into Carbon’s Digital Light Synthesis technology and 2017 collaborations with Desktop Metal on innovating additive manufacturing for metal components and Xometry for on-demand manufacturing solutions.

It has recently invested in ELISE, a German start-up specializing in producing component DNA in order to generate optimum parts.

The campus is currently setting up its production line, which will replicate process chains in series production environments while integrating additive manufacturing technology. This will be part of its Industrialization and Digitization of Additive Manufacturing for Automotive Series Production (IDAM) project. To achieve this, the BMW Group will be working with 12 project partners, including the German Ministry of Education and Research. According to the company, the IDAM team is already preparing the requirements for series, individual and spare-part production.

The expected output is at least 50,000 series components annually, plus 10,000 individual and spare parts.

Associates demonstrate automation work with a robotic arm and a HP Multi Jet Fusion system at the Additive Manufacturing Campus. (Image courtesy of the BMW Group.)

On the other hand, its POLYLINE project will be working instead with plastic. Fifteen partners will be working with the campus to develop and test automated production lines for plastic parts. The project will be centered on “digitally linking process steps, and the development of a consistent quality assurance methodology for the entire process chain.” The research is expected to figure out how to reduce manufacturing costs by as much as 50 percent while increasing the stability and sustainability of different technologies.

The campus will also be offering personal consultations and training courses to associates across the company. Ertel expressed its significance during the opening ceremony by saying, “To roll these technologies out successfully, we need well-trained colleagues across the network who fully understand their advantages and features. To use them, designers will need to adopt a new way of thinking and an entirely new approach as they devise the upcoming components. 3D printing allows almost any shape to be produced, paving the way for new designs and functions. Nowadays, there are countless components that can only be manufactured additively.”

At present, all existing BMW Group production sites can manufacture 3D-printed parts as needed. The Additive Manufacturing Campus is expected to refine the company’s additive manufacturing processes in order to complement its existing production technologies.

For more news and stories, check out how a group of researchers developed a new ultrafast additive manufacturing technique here.