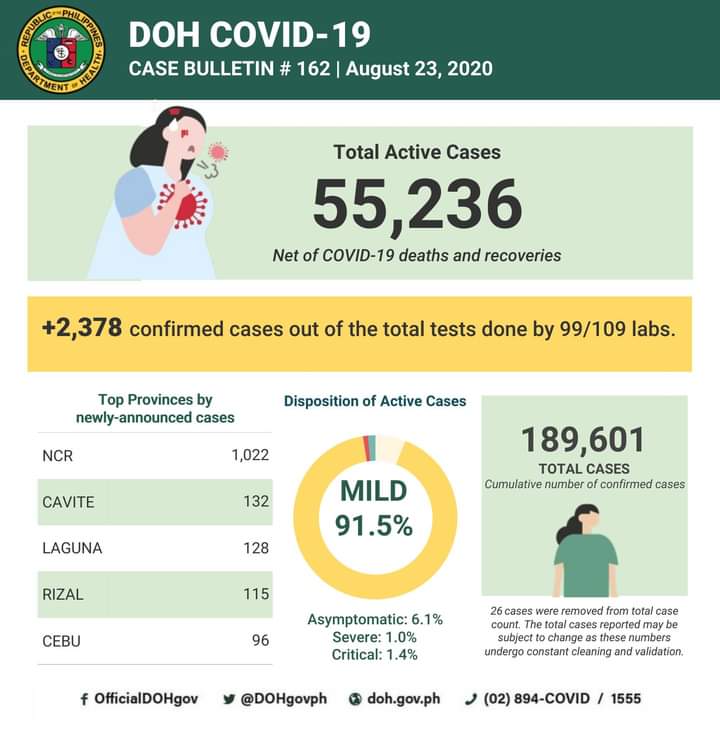 
(Eagle News)–The number of coronavirus disease 2019 cases in the country topped 189,000 on Sunday, Aug. 23, after the Department of Health reported 2,378 additional cases.

Recoveries rose to 131, 367 after 16,459 additional ones were reported today as the DOH implements the time-based approach for determining the release of patients in isolation, as recommended by the World Health Organization.

The DOH had said the results of this implementation would be reported every Sunday.

Under the GCQ, restrictions are supposed to be eased.

But some restrictions were retained under this GCQ, following calls for the same by Metro Manila mayors who had noted the immediate spike in the number of COVID-19 cases in the country when the region was first classified as a GCQ area in July.

These restrictions include the ban on gyms and Internet cafés, even if these were already allowed to operate under the first GCQ.

The government has also said only mass gatherings of up to ten people are allowed in GCQ areas.

Apart from Metro Manila, Laguna, Cavite, Bulacan and Rizal are under the GCQ until Aug. 31.