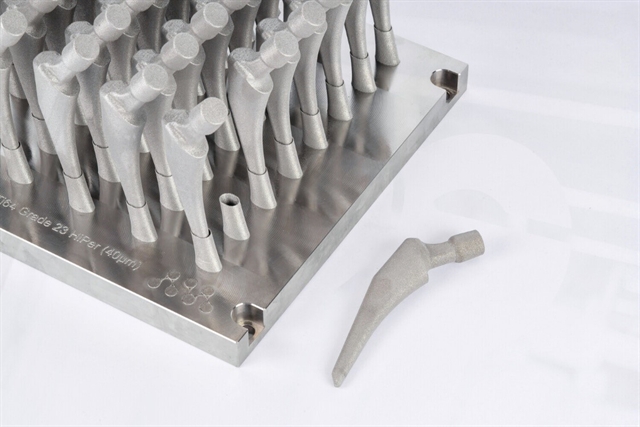 
Most production metal additive manufacturing (AM) equipment today builds structures from a powder bed. Successive layers of carefully doctor-bladed, well-classified powder are melted with lasers or electron beams. AM has become a proven technology with many production applications in critical industries such as automotive and aerospace. Designing parts for powder bed additive, however, is about more than just the part conformation.

All additive builds need support, and a major factor in the success of part design for additive manufacturing is the designer’s ability to choose the correct form, placement and quantity of supports to maintain a part’s dimensional stability during the build. Support design is a significant part of overall design and production cost, so it pays to consider the problem with as much creativity as the design of the part itself. Insufficient support can lead to part distortion, while an overly supported part slows the build and adds postprocessing costs.

Finding the right balance is the result of the right combination of experience, software and a good knowledge of the strengths and limitations of the powder bed process.

Michael Wohlfart, additive manufacturing consultant with the Additive Minds unit of EOS, has demonstrated low-support and support-free builds, and sees this as a production-ready technology. But why is support necessary in the first place?

“Basically because of three different reasons,” Wohlfart declares. “One is heat transfer. We use support mainly in overhang areas where we have reduced heat transfer because of the surrounding powder, which has a lower heat conductivity than the solid material. The second one is perhaps the most important one, and this is residual stress. In additive manufacturing, we have a lot of stress because of temperature gradients. We have a very, very localized energy input, and we are melting layer by layer, which means you have a hot layer on top of something that has already cooled. It shrinks, but is partly restrained by the lower layers, building up further stresses.”

“The third one is recoater forces,” Wohlfart continues. “When we spread the powder on the powder bed, of course there is friction. It doesn’t necessarily have to come from the recoater blade, but also just from the powder itself, especially when edges of the part are rising. With residual stresses, part of the application can stick out of the powder bed and can touch the recoater. If the part is stable, well connected to the build plate, or oriented correctly, the risk of rising edges is low due to the residual stress and this ensures a proper build.”

These first two factors Wohlfart mentioned, heat transfer and residual stress, are well known to all users of powder bed technologies, particularly metal. The recoater, however, is rarely a factor with heavily supported builds—but must be considered when designing for low and support-free production.

The recoater’s function is to apply a uniformly thin, level bed of powder (typically between 30 to 60 microns for EOS equipment, with some processes ranging from 10 to 90 µm) to form each successive layer, but an unsupported part may be moved by contact with the blade. Soft, silicone-tipped recoater blades help, and the contact issue can be best addressed at the part layout/programming stage. It needs to be considered, but it is controllable.

Wohlfart has studied the problems of reduced support metal additive partmaking and has published the results of an interesting experiment.

His test parameters were chosen to be difficult: a flat test shape, Ti64, notable for high residual stresses, and a rigid metal recoater for a worst-case scenario for part contact. If it worked there, it would work in most builds, which would rarely combine these unfavorable conditions.

Heat transfer was a primary issue. In this extreme test case with no supports, heat transfer through the powder bed was minimal, as the air-filled interstitial voids between the power particles acted as an insulator. The energy input profile turned out to be key to managing heat, and Wohlfart determined that not only beam power, but the scanning pattern could be optimized for a low or no support build.

Z-Segmentation and assignment of process parameters in EOSPRINT 2. (Image courtesy of EOS.)

Using EOSPRINT 2 software, specifically its Z-Segmentation function, the part was virtually divided into different zones with unique parameters applied to each 60 micron “slice.” Results were excellent, with flat surfaces achieved in a tough material with no pre-deformation required. This suggests that tough builds may be achieved through optimization of the build process, rather than reliance on the part designer to compensate for warpage.

Build plate after unpacking of the job (Image courtesy of EOS.)

Wohlfart’s three factors are just some of the considerations that part designers must think about when making the move from one-off prototypes to production part making.

For example, the direction of the build matters and is a factor in surface roughness. High aspect ratio parts are difficult and pose special challenges in support free building. The most efficient build orientation to fully use the available working volume may be impractical for support free part making. Are fewer parts with no support structures economically favoured over more parts per build but with secondary operations required to remove those supports?

These are all part of the cost considerations when working up an additive build.  Wohlfart states it simply: “Part orientation is always a compromise between your preferred build direction, how many parts you can fit on the platform and how much support is required.”

In many cases, a hybrid approach with some minimal support is best. Depending on the aspect ratio and complexity of the part, the ideal build stack may not be the densest arrangement in the working envelope. Postprocessing to mask the support points on the part might be as simple as sanding, or as complex as CNC machining, but in many cases these points can be hidden by supporting the part in a nonessential or nonvisible location.

The surface roughness can also often be hidden by choosing to support at a mating point with another assembly, or at a point that will be covered by cosmetics such as a trim plate or label. Short run injection and die casting mould designers face similar problems with surface finish at the cavity gates. Part designers familiar with those processes should have no difficulty adapting to powder bed metal additive manufacturing.

A major advantage of the additive process, however, is that unlike the hard tooling of die casting or moulding, it’s not always necessary to optimize the packing fraction of the working envelope immediately. Pilot production or limited volume early runs can be programmed for optimal part quality with relaxed part density in the machine, then tweaked to improve the number of parts per build. It’s possible to iterate to success in the design stage and well into the production phase.

In addition, it no longer takes decades of experience to calculate a solid support strategy, says Wohlfart. “Support generation is to a big extent automated. There is software from several companies that can create support generation. You are setting up a profile for each material where you specify from which angle you want to have support, how big it can be, the largest unsupported overhang, things like that. It’s very automated. Still, you need experience to make the support most efficient. I would say even a beginner could make or generate the supports, but with experience it’s possible to optimize them and to tailor it to higher productivity and also better removability. So far, there is no fully automated solution on the market, even though some software companies claim this.”

Every decision regarding part design and build orientation is controlled by the fundamental need to get energy into the powder, then take it out. Residual stress is always a major consideration. Like all numerically controlled process equipment, parameter setting is essential and the more automated this is, the more consistent the parts will be from run to run.

For powder metal part making with minimal or no supports, residual stress is key; but recoater forces must be considered. A complex part may be designed with correct pre-deformation so that it relaxes to the desired shape, but may suffer from recoater contact. A change in the build orientation can often correct this and may be essential—even if doing so uses more “real estate” in the build volume.

Mass production of metal AM parts requires no special construction or support services for existing factories. (Image courtesy of EOS.)

Overhang comes up often in any discussion of part design for powder base additive processes, and part designers think about overhang in terms of angles.

“It all depends on how low you want to go,” declares Wohlfart. “If we are talking about completely flat surfaces, we call it zero-degree overhang. Imagine if you want to print a flat disc in the powder bed without any support. Due to the residual stress it will instantly buckle up and form a cone. We would need a support on at least on one side to the base plate to avoid that buckling.”

“We can go down to a certain angle without support, but at extremely low angles it’s required. And sometimes it’s even beneficial from an economic point of view,” Wohlfart explains. “Plus, you could with some work and tailoring of process parameters go to very low, low angles, but this can have an effect on the build time. Sometimes the build time can’t be allowed to increase. And there, it might even be reasonable to put in support just to be able to speed up the process again.”

Is lower cost-per-part possible with slower build speeds? Yes, if the reduction in supports or denser part packing in the build volume results in more parts per machine hour or lower post processing cost. Some parts are design constrained and the part shape is determined by the application need, so the build has to be developed around its unique properties. Aerospace parts are a typical example but the higher value the part, in general the more flexibility in post processing.

Closed impellers are highly interesting applications for AM, which show the trade-off between build productivity and the use of support. If a rotating part that must be balanced for high RPM may require machining, for example, removal of accessible support is essentially cost free. However, if the supported area is not accessible for the tool it is of course important to produce it support-free.

In every case, Michael Wohlfart’s three basic principles can guide the engineering professional to an efficient design—and the price is compelling. “It’s just a mindset. If the designer always pays attention to these principles, I don’t see why it should be expensive. If you just take a conventional part and want to print it, then of course you would need to invest a little bit more; but if you consider these three things in the design process, and design it for AM, then it comes for free.”